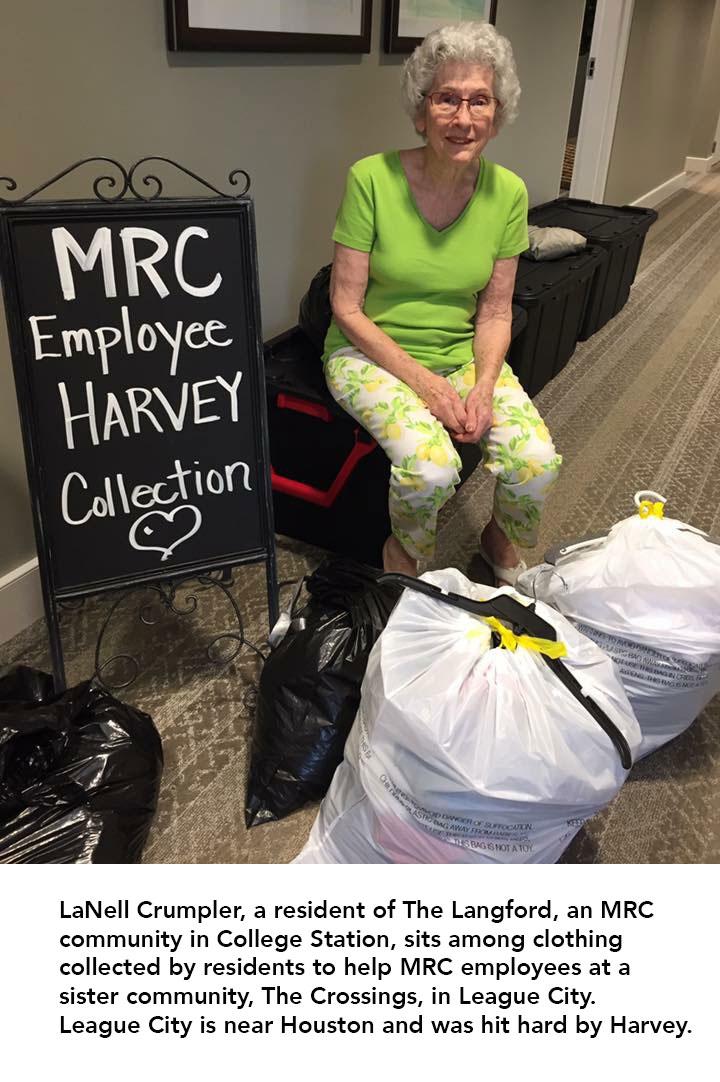 In the late afternoon hours of August 25, 2017, a Category 4 storm named “Harvey” began rolling into the Houston metro area. It would eventually dump more than 50 inches of rain and strike the Texas coast with winds up to 130mph. The storm brought unprecedented amounts of rain to an area stretching from the coastal town of Rockport to as far northeast as Lufkin before dissipating. Some areas received as much as 60 inches of rain.

With eleven senior living communities that understood all too well what it meant to be impacted by a hurricane, thanks to Hurricane Ike back in 2008, Methodist Retirement Communities (MRC) marshalled its resources company-wide to ensure the safety of its resident population. Each community implemented disaster plans and braced for the worst.

As Harvey pummeled the Houston area with a deluge of rain on August 25 through 27, the company turned its primary focus on The Crossings, its new full-service community in League City, a coastal suburb, and our two affordable housing independent living communities in La Porte named Bayview and Oakview. Fortunately, these communities were constructed to withstand hurricanes.

“In developing The Crossings, we invested in raising the elevation of the land and included other key building protections to withstand potential strong weather event possibilities in this area,” said Ron Jennette, president and CEO.  “The investment paid off beyond measure. There was never a time when we had to worry about the safety of our residents, employees, or their families that sought refuge under our roof.”

As Harvey approached, the MRC system went into full emergency operational mode to help The Crossings in League City. Extra food and medical supply delivery trucks arrived the day before Harvey. The generator was filled with provisions for refilling, and staff and family members — about a hundred altogether — moved into the community both for their good and also to serve residents during the storm.

Sister MRC communities like Crestview in Bryan, Creekside in Huntsville and PineCrest in Lufkin sent staff to The Crossings both ahead of and immediately after the storm. Residents helped with laundry and served snacks to staff during the storm. The central office sent executives to help on site while the CEO and other executives maintained constant communications for coordination, strategy and forward planning necessary to ensure needs would be met.

We also triaged residents from other communities as they evacuated, initially to us, via helicopters. In La Porte, we set up a constant communication system coupled with dedicated staff who stayed at the community to ensure all was well there.

All MRC communities donated support to help employees who were victims of the storm, from financial assistance for home and vehicle damage recovery, to clothing and other supplies.

One year later, The Crossings and all MRC communities can look back with pride and gratitude on a job well done, with staff having performed valiantly and with our buildings having withstood Harvey with no real damage. Yet many in the coastal and Houston area still struggle with Harvey’s lingering effects. Our thoughts and prayers go out to those in the most affected areas who are still unable to return to their homes.